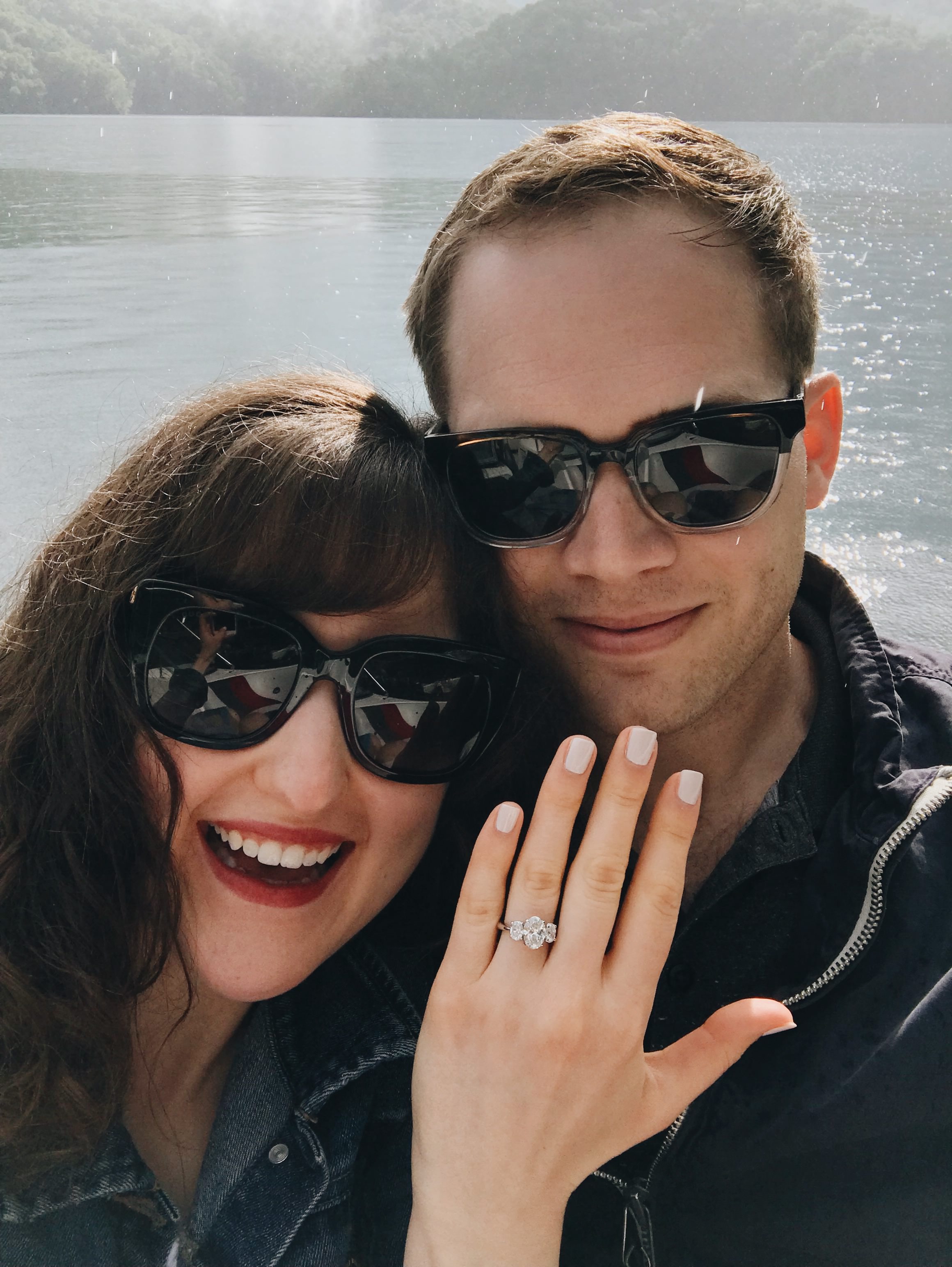 I knew I wanted to marry Andrew on our trip to Carmel last September. Somewhere between bawling my eyes out in the airport to driving up the coast of Big Sur to sipping cocktails in our hotel lobby, I realized that this man understood me better than anyone, and despite my flaws and fears, he loved me.

I also knew I wanted to marry him on Thanksgiving weekend, when I cancelled my flight to Georgia at the very last minute. I gave in to my anxiety (over travel, over planes, over leaving my comfort zone), and Andrew ended up going home alone that holiday. He was disappointed, but instead of yelling and fighting, Andrew treated me with compassion, forgiveness and grace.

Lastly, I knew I wanted to marry Andrew on Easter night. We drove back to the city after spending the day with my family in Hinsdale, and he revealed that he’d talked to my dad. When Andrew suggested that the two of them get together soon, my dad responded like this: “Andrew, I know what you’re going to ask me. I would have said yes a year ago. You have my permission.” My heart swelled in my chest as Andrew shared this with me, and suddenly, I could not wait a second longer for him to propose.

For the weeks leading up to Memorial Day weekend, I became antsier than ever. I knew a proposal was coming soon, but Andrew was tight-lipped. He changed his iPhone password, turned off text previews, took secret trips to the suburbs and somehow, put up with my prying for information. “But when?” I’d whine constantly. He would laugh and tell me to start investing in weekly manicures. I was losing my mind. Would it happen in May? June? Surely it would happen before my birthday in July, right? That would be a lot of manicures.

Meanwhile, Andrew was letting others in on his secret. He initially went ring shopping with my mom, and after careful research, he found the one. Standing at the jewelry store, he called my parents to share the news. “We’re at Oak Brook Mall!” they said. “We’ll be there in ten.” And so my mom and dad were the first ones to see my ring. The jeweler poured wine and beer for the three of them — a joyous occasion indeed. The ring was shipped to Hartwell, Georgia shortly thereafter, where Andrew’s parents waited for the FedEx truck expectantly. 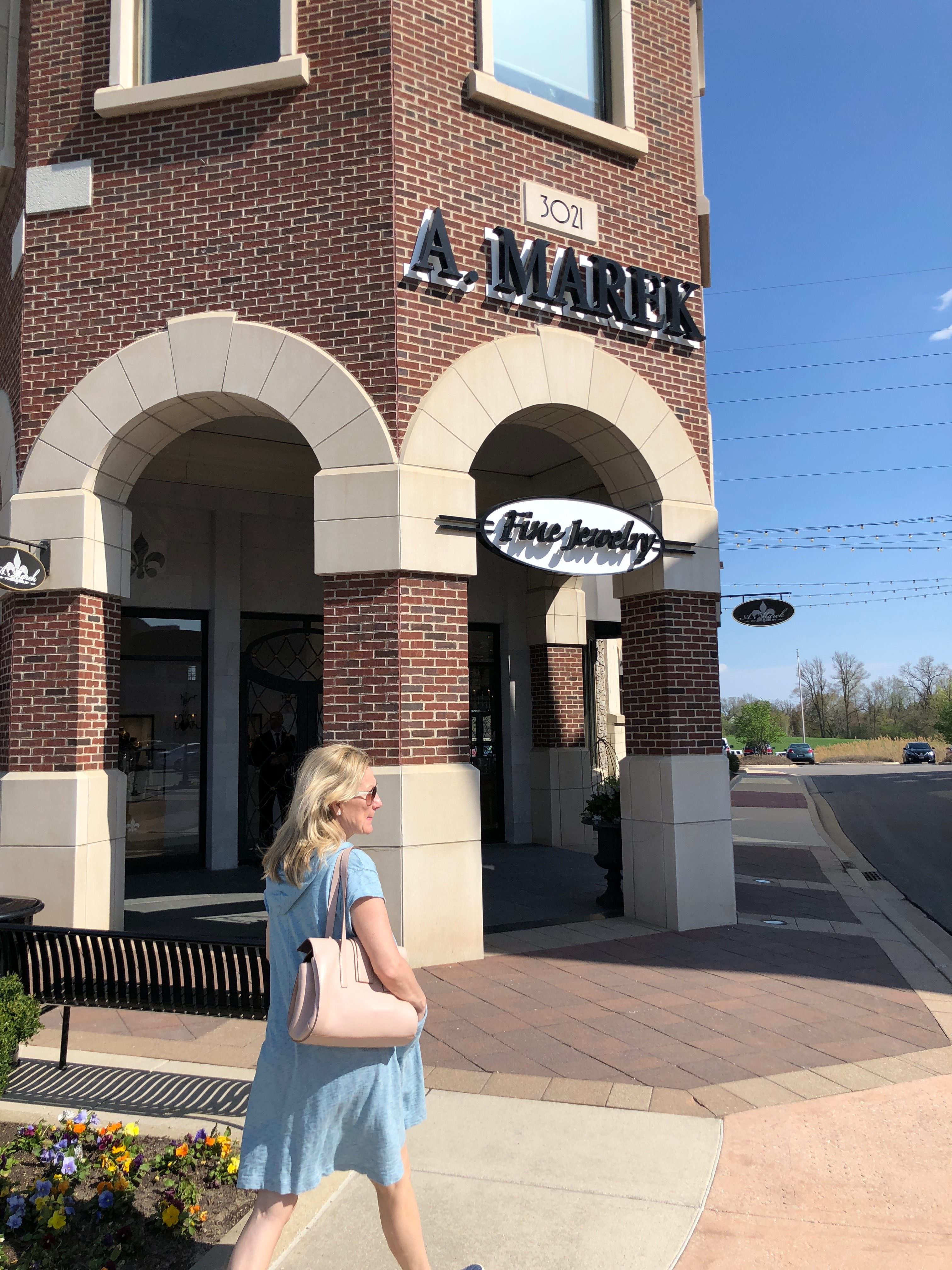 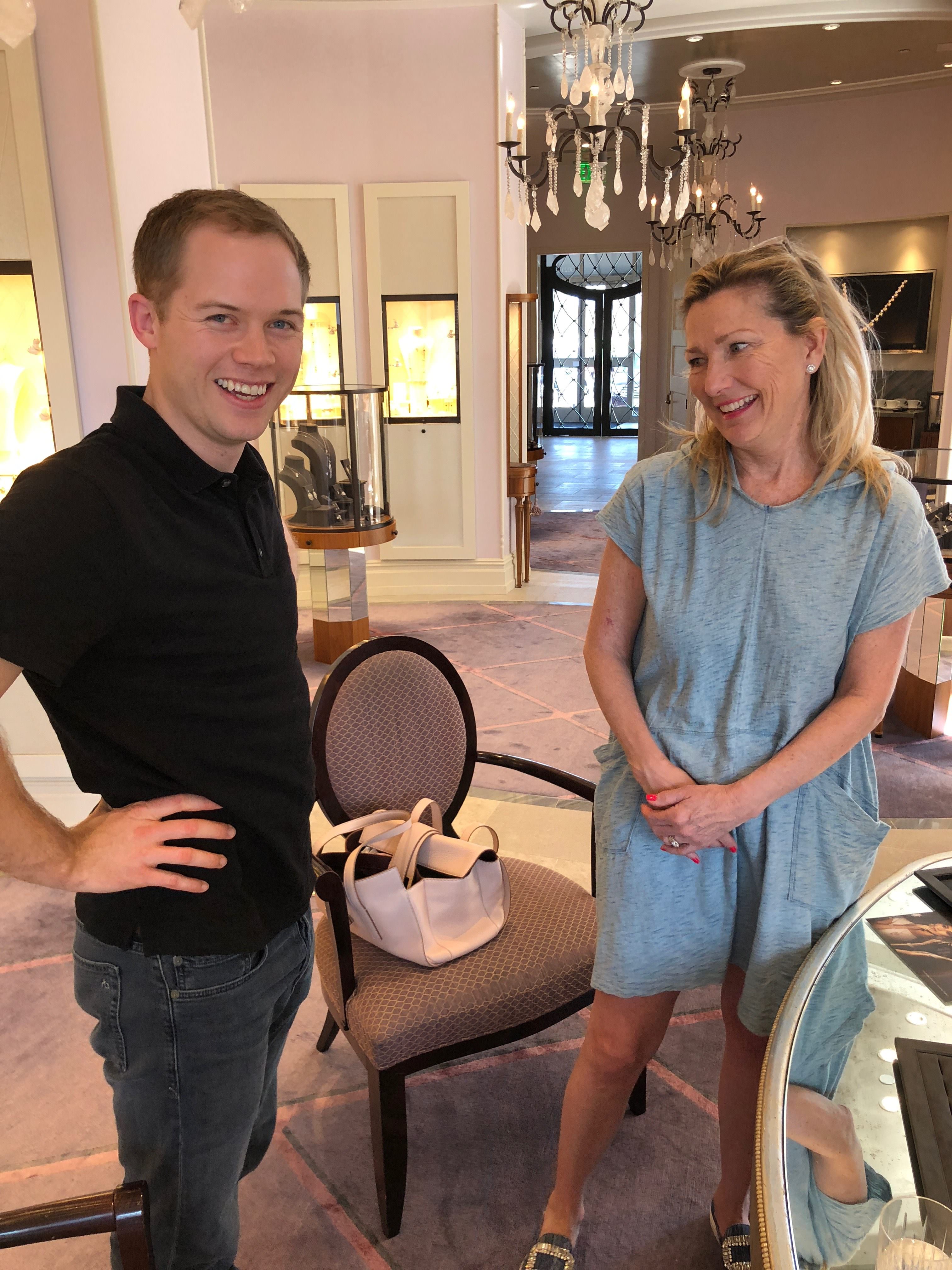 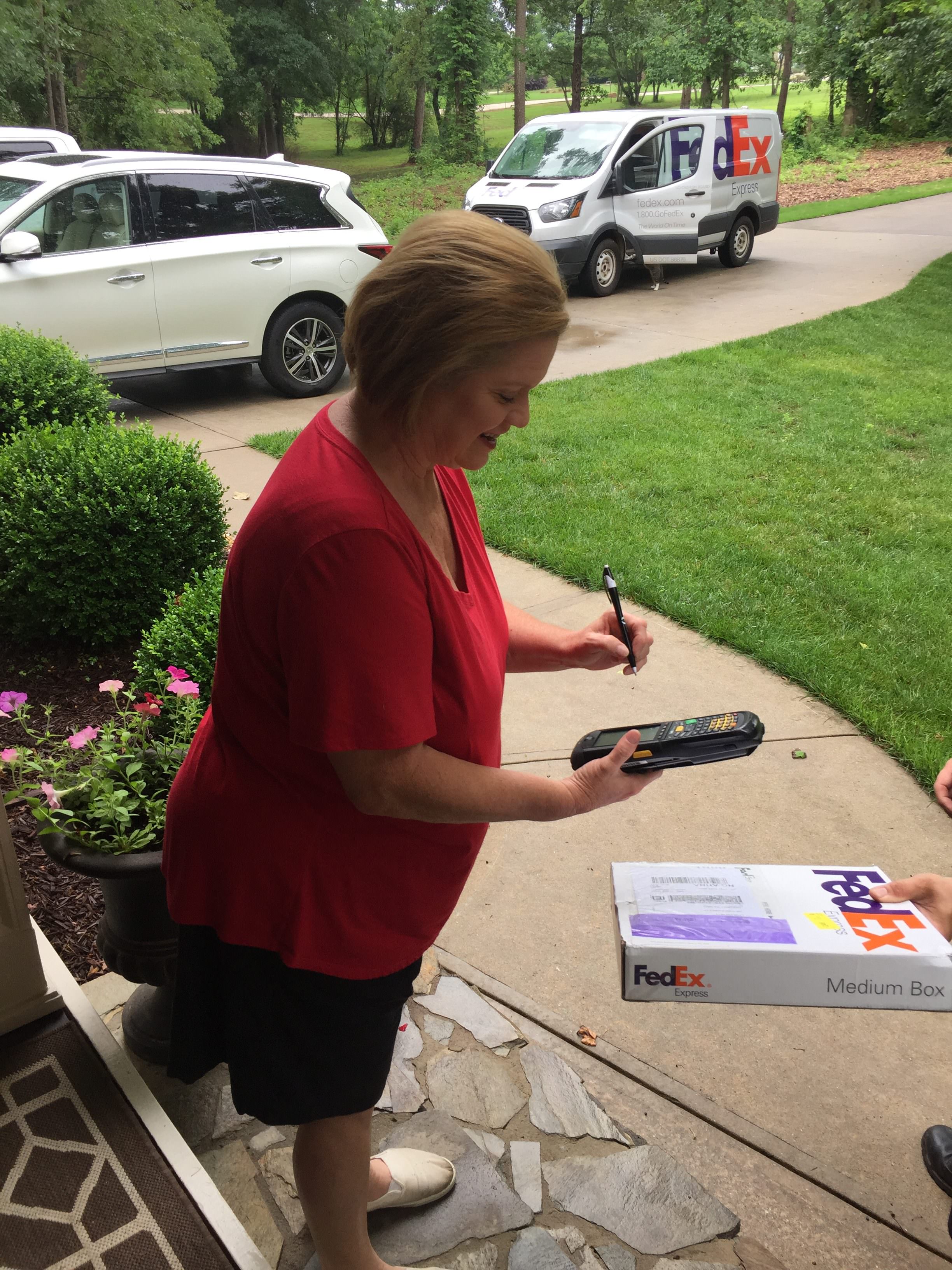 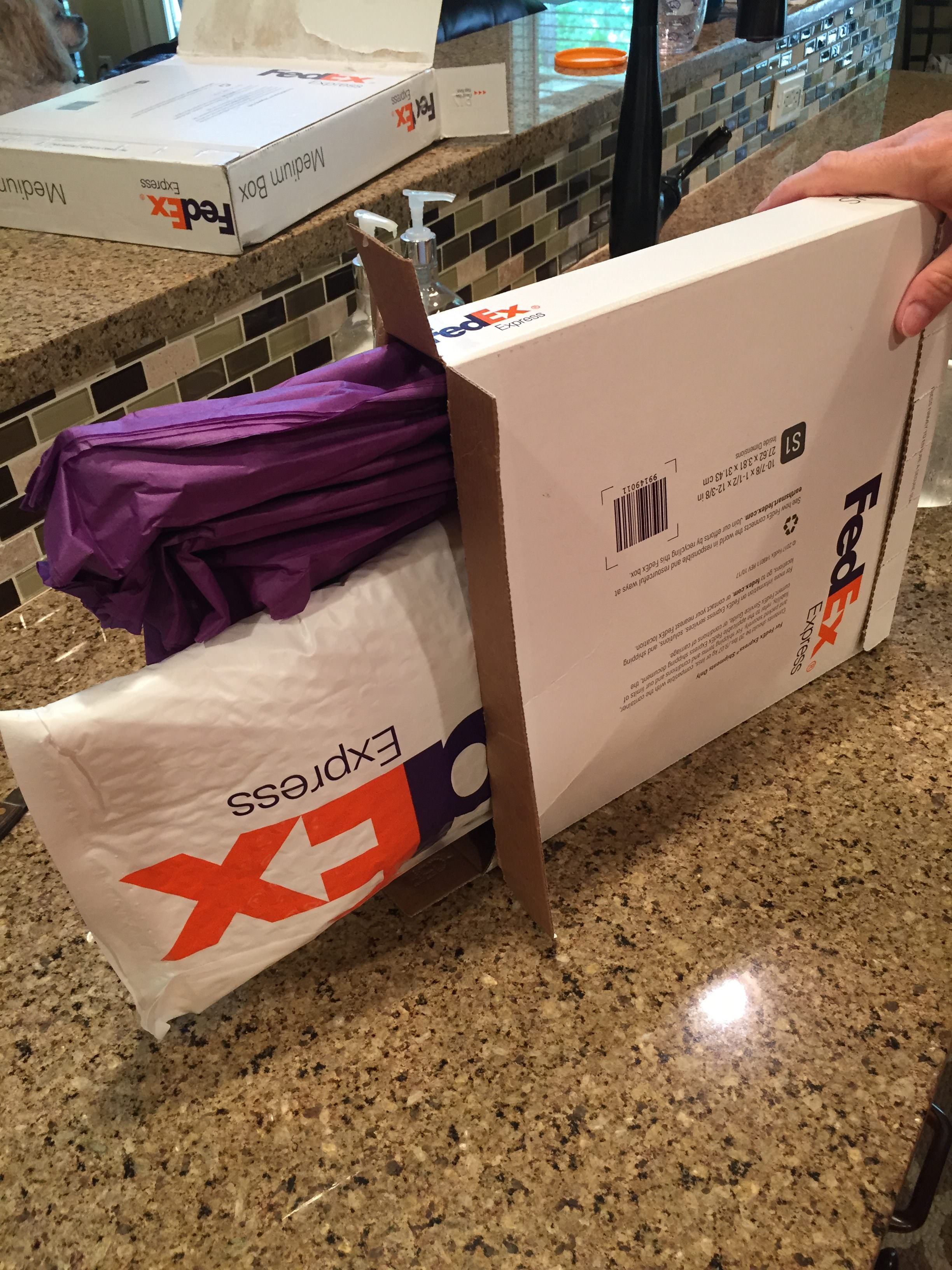 For Memorial Day weekend, Andrew and I had been invited to our friend’s lakehouse in North Carolina. I was packing for the trip the day before. My parents were over, and my mom was helping me decide what to bring.

“Don’t you want to bring something nice for Monday?” she said cautiously, surveying the heap of t-shirts and Lululemon shorts on my bed.

“Why? Is he proposing?” I grinned and tried to squeeze out a tiny drop of information from my mom.

I agreed, and after a few try-ons, we settled on a summery and silky black dress, black purse and silver sandals. It was the perfect proposal outfit. I prayed silently that Monday would be the day.

Our flight to Georgia was at seven the next morning. Exhausted, we made it to Midway with just enough time to grab two iced coffees. I spent the short flight listening to a podcast and talking to Andrew, and soon, we were in our red rental car and en route to lunch with his parents and grandmother. For someone who has often-crippling travel anxiety, it was the smoothest experience I’d ever had. I thanked God.

We drove to a tiny town called Toccoa. It was pouring rain, and I felt very tired. Andrew’s family was already at the restaurant waiting for us, and as soon as we walked in the door, they met us with hugs and greetings. I sat in-between his mom and grandmother, and a moment later, Andrew and his dad stood up. “We’re going to move some stuff into our rental car,” Andrew explained. Apparently, his parents had brought us wine, La Croix and homemade chocolate chip cookies to bring to the lakehouse. The two walked out the door and returned a few minutes later.

After lunch, I excused myself to go to the bathroom. I stood there, looking at my tired face in the mirror. My straight, blow-dried hair was becoming curly again — the humidity was doing its work. I sighed and returned to the table. The four of them were on their feet, peering at Andrew’s phone.

“Y’all should take this route,” his dad said, pointing at a line on the screen.

I came closer. It was a map. “Where are we going?” I asked, unenthused.

“Toccoa Falls. This town is known for it. You’ve got to see. You’re only here once,” his mom told me.

Going to see a waterfall was the absolute last thing I felt like doing. It was still raining heavily. We didn’t bring an umbrella. My hair was turning into a frizzy mess. Andrew and I were both wearing our (matching) white J.Crew sneakers. “Nooooo,” I complained. “I don’t want to.”

We hugged Andrew’s parents and grandmother goodbye, and his dad gave Andrew an umbrella — “just in case” we wanted to check out the falls.

“I’m not getting out,” I told Andrew, crossing my arms in the front seat. We had driven to the parking lot for Toccoa Falls, about ten minutes from the restaurant.

I was so annoyed with Andrew at that moment. Begrudgingly, I opened my car door. “This is so stupid. I’ve seen a waterfall before.”

(Graue Mill is a small, unimpressive dam in Hinsdale.)

We paid a few dollars in the visitor’s center, and then he pulled me close to him as we walked in stride beneath the umbrella. For a fleeting second, I wondered if I was heading to my proposal. But then I brushed away the thought. Andrew knows I am not a nature girl. I don’t like humidity, excessive heat or mud — all of which were present. What’s more, we were going to the lakehouse that afternoon. Andrew wouldn’t propose beforehand.

The path opened up and suddenly, there was the waterfall, right in front of us. “Wow,” I breathed. Andrew handed me his phone so I could take a photo. I walked a few steps forward, leaving Andrew in the rain behind me. All at once, I heard the crunch of gravel, and I swiveled around.

There was Andrew, on one knee. His eyes were full, and in his hands, he held a ring.

“Melanie,” he paused. I knew what was next. “Will you marry me?”

He stood up and enveloped me into a hug, and I fell into him. “Are we alone?” I whispered. He said yes, and I buried my face into his shoulder and cried. My heart was beating so fast and my world was spinning and I hadn’t even gotten a good glimpse of the ring.

Andrew slipped the ring onto my finger as the rain continued to fall, quiet in comparison to the sound of the rushing water. Suddenly, another couple emerged from the path. Andrew jogged over to them. “We just got engaged!” he told them excitedly. “Would you be able to take a picture?” 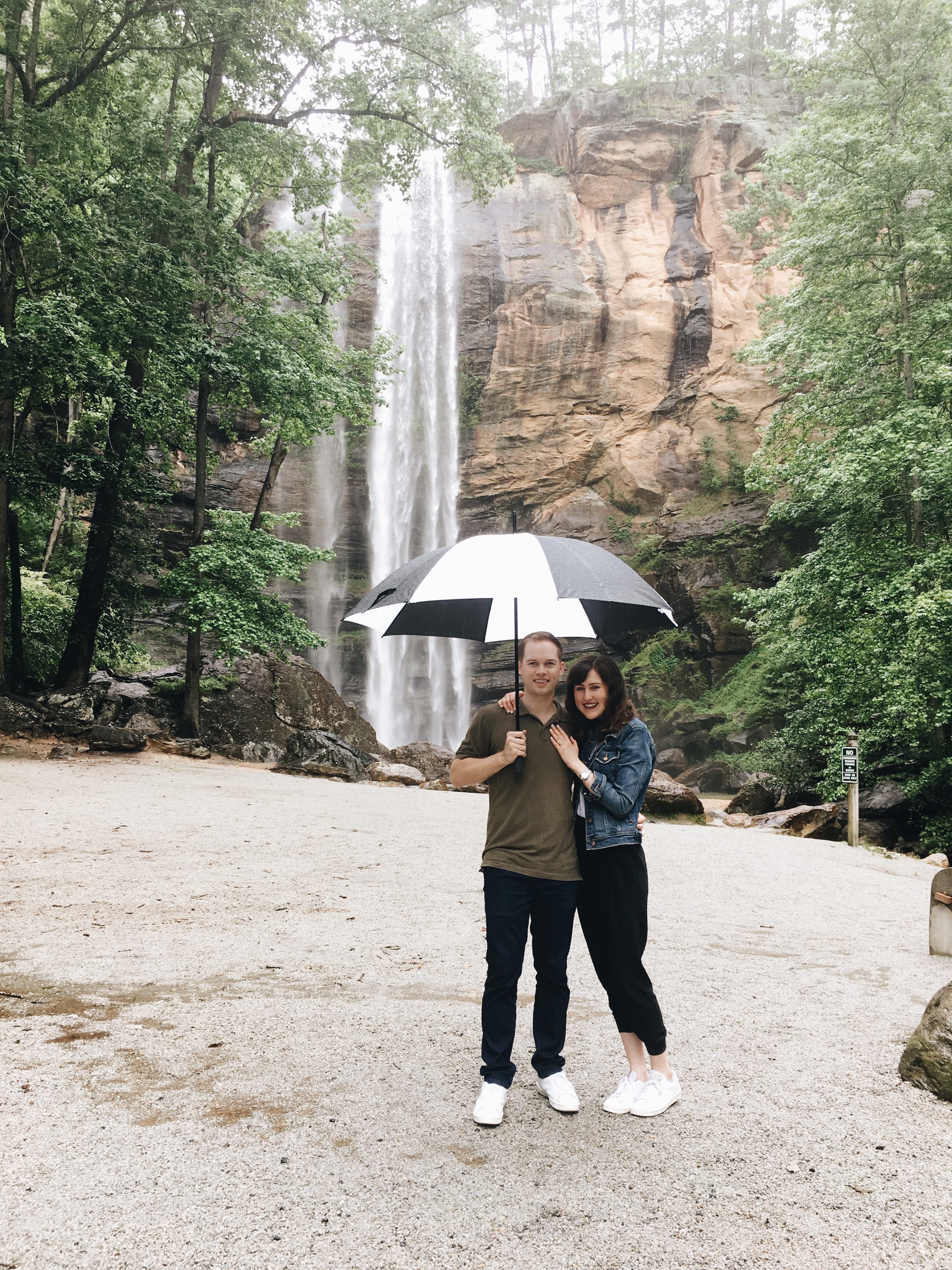 We were the only ones at the falls when he proposed, which was all that I could have wanted — just us. And right when we were ready for a photo, God sent us two photographers.

“So, my parents are waiting for us in the parking lot,” Andrew beamed. “Let’s go.”

The walk back was dreamlike. I can hardly remember what we talked about, but I do know that I completely stopped thinking about how bad my hair looked or my silly white shoes. I just felt joyful. It was all I could do not to run to his parents’ car.

We reunited with his family, and all the pieces of the story began to unravel: the ring shopping, the proposal planning, the handoff. My family, his family and my best friend were all in on it. I couldn’t believe they were able to keep a secret that big from me, but I’m also so glad that I didn’t find out.

His parents and grandmother left a short while later, and Andrew and I returned to our rental car. We stayed in the parking lot for some time as I FaceTimed and texted my friends to share the news. Andrew sat in the driver’s seat, relieved and happy. I also finally got to study my ring — my stunning, unique, elegant three-stone oval ring. It was the most beautiful piece of jewelry I’d ever seen. 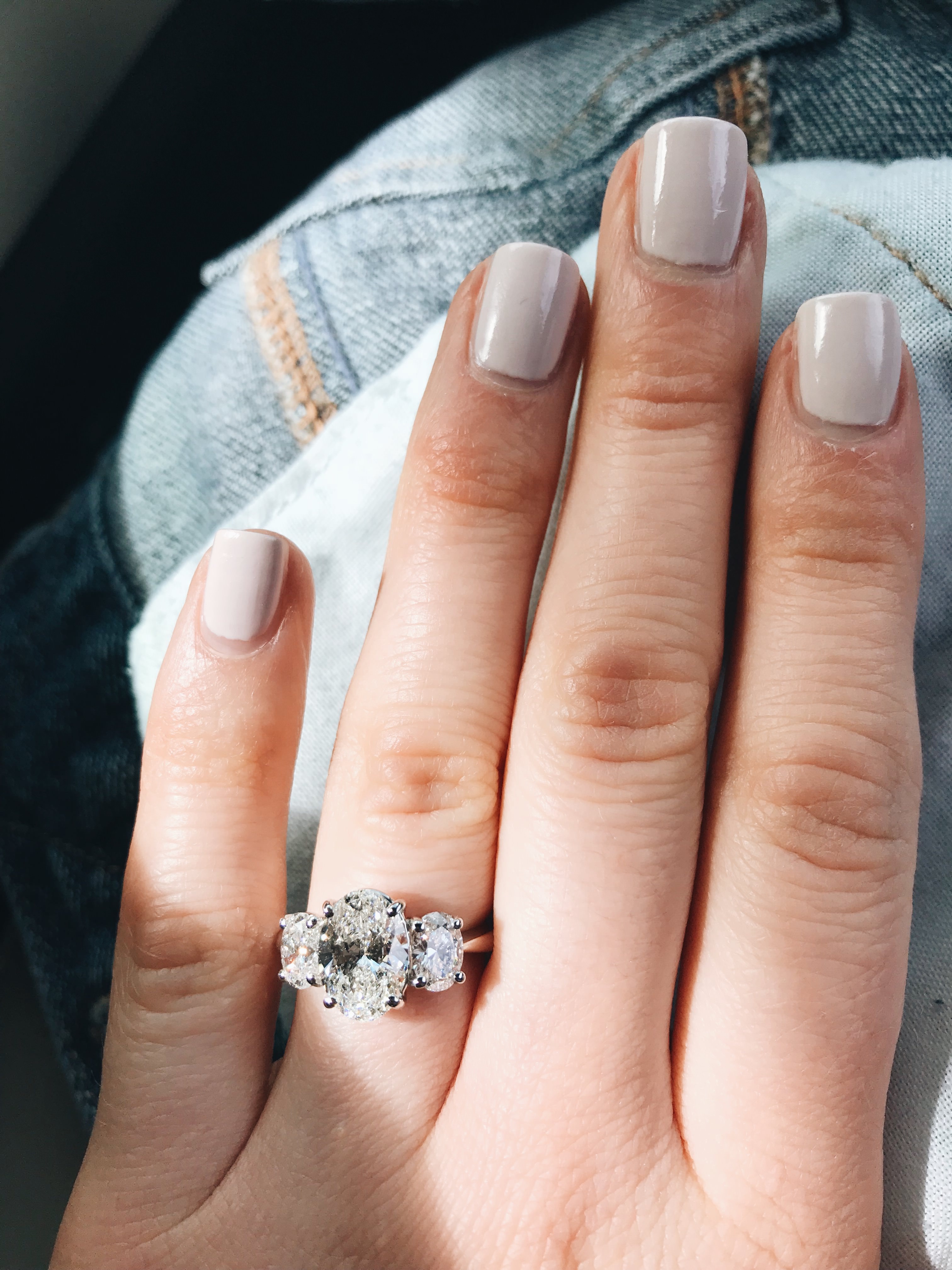 Two hours later, we crossed a state line and arrived at Nantahala Lake. Here, we spent the weekend with our friends Sarah and Bradley, and Bradley’s family. We felt so loved and at peace during our days at the lake. There was champagne, boating, hammocking, steak, fresh fruit, a rainbow, beer-tasting and swimming. We were tucked away in the mountains of North Carolina, and with limited cell service, I found it nearly impossible to think too much about work. It was a sweet escape. I slept with my ring both nights. 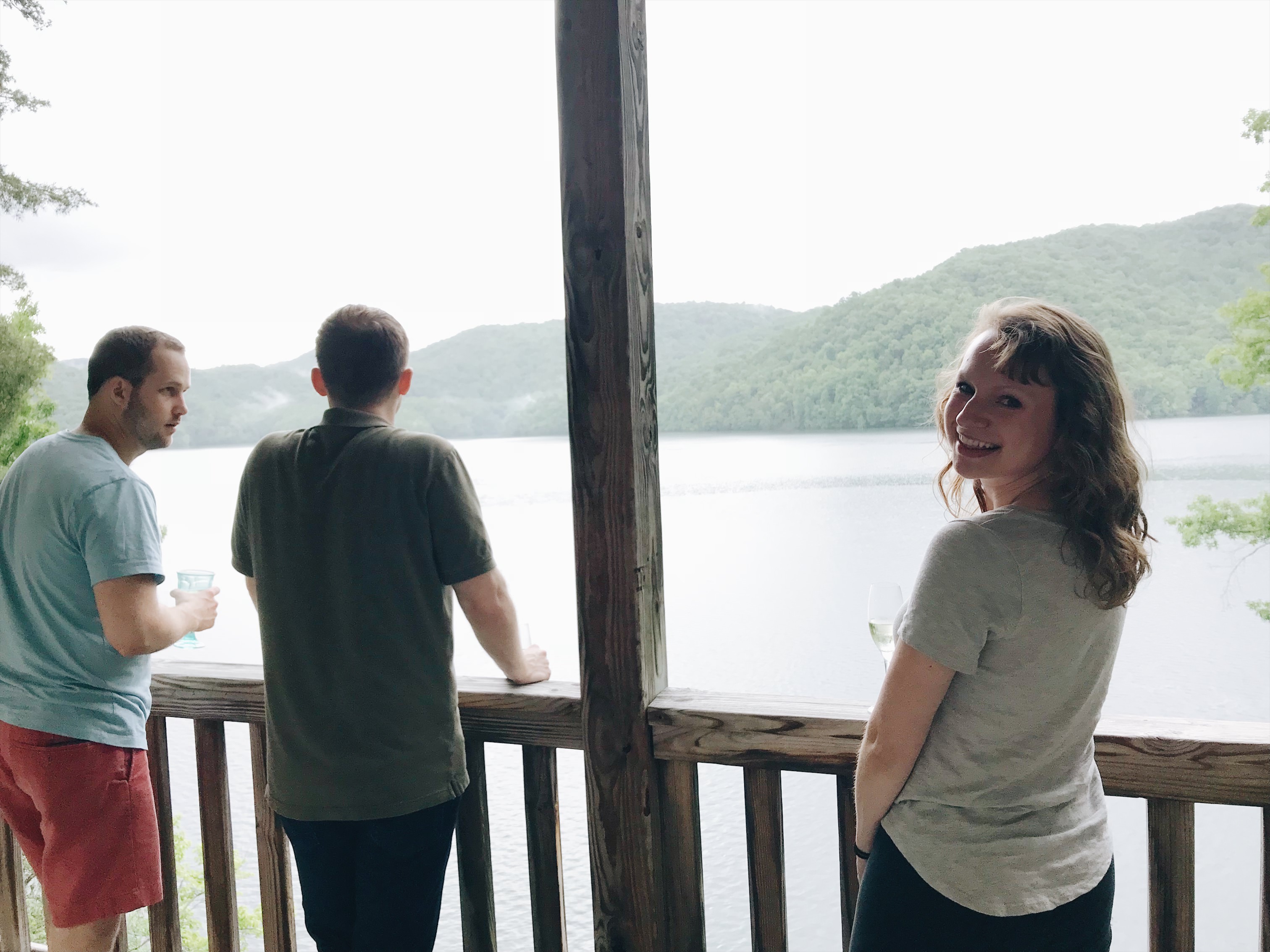 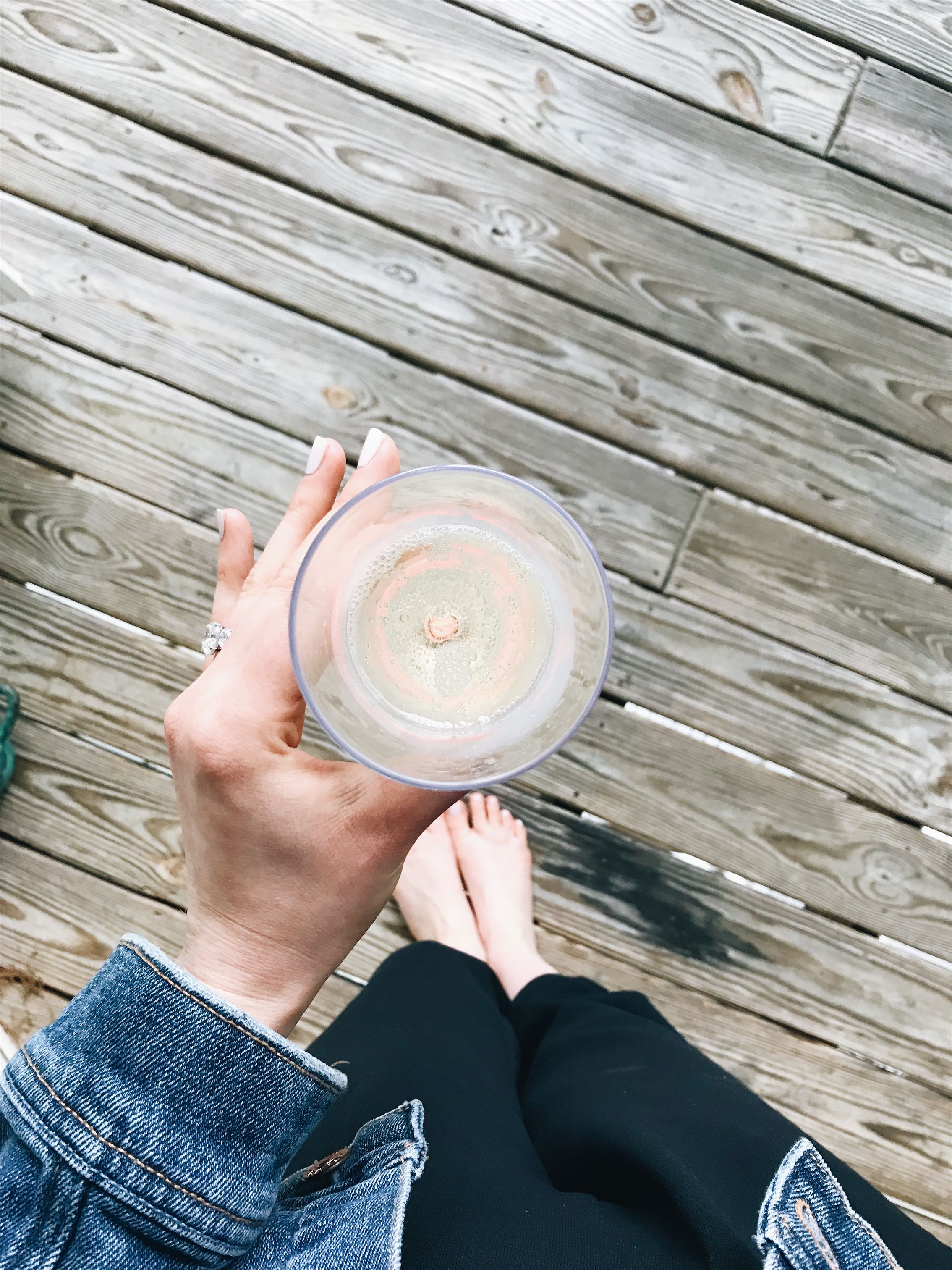 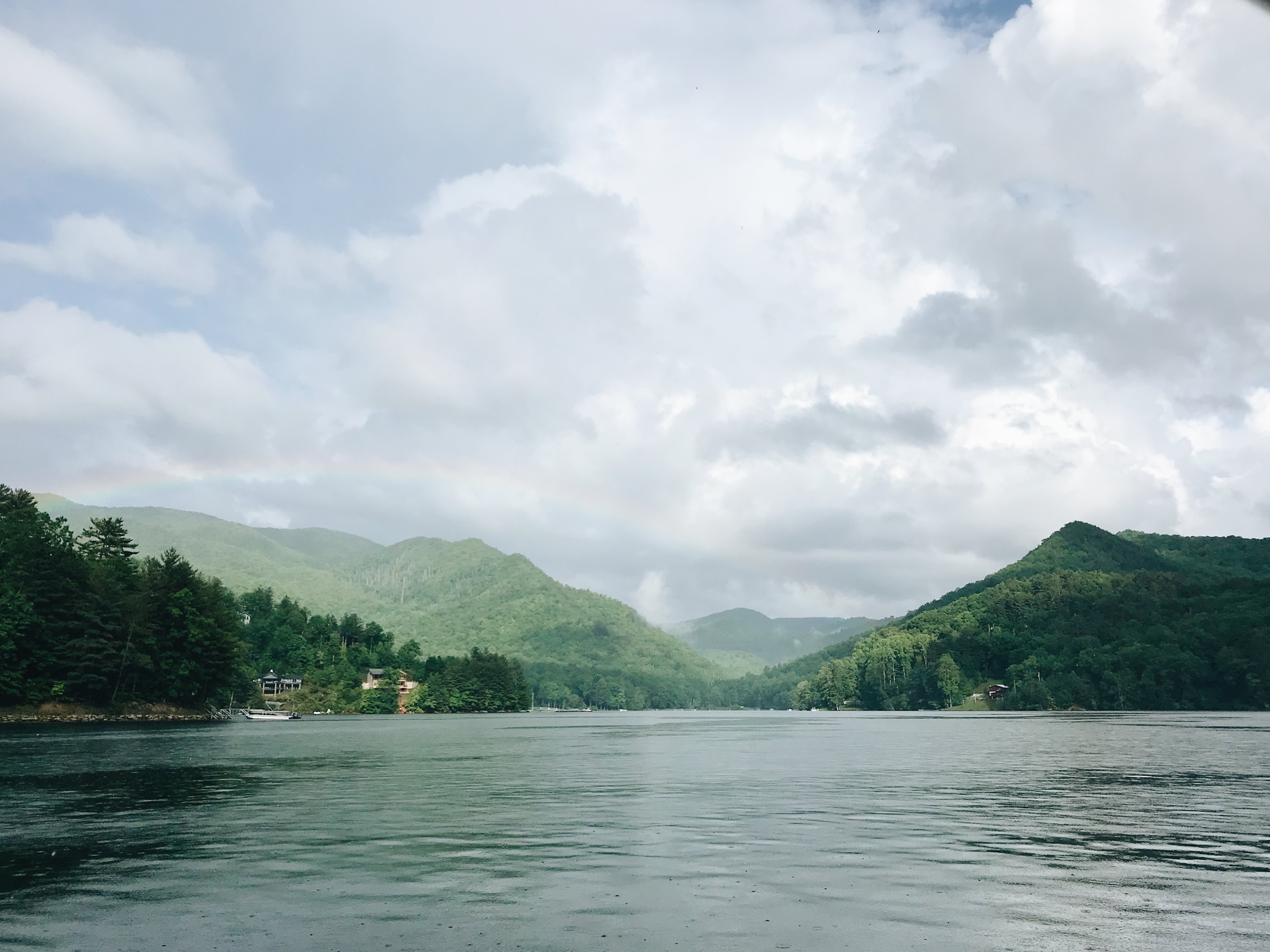 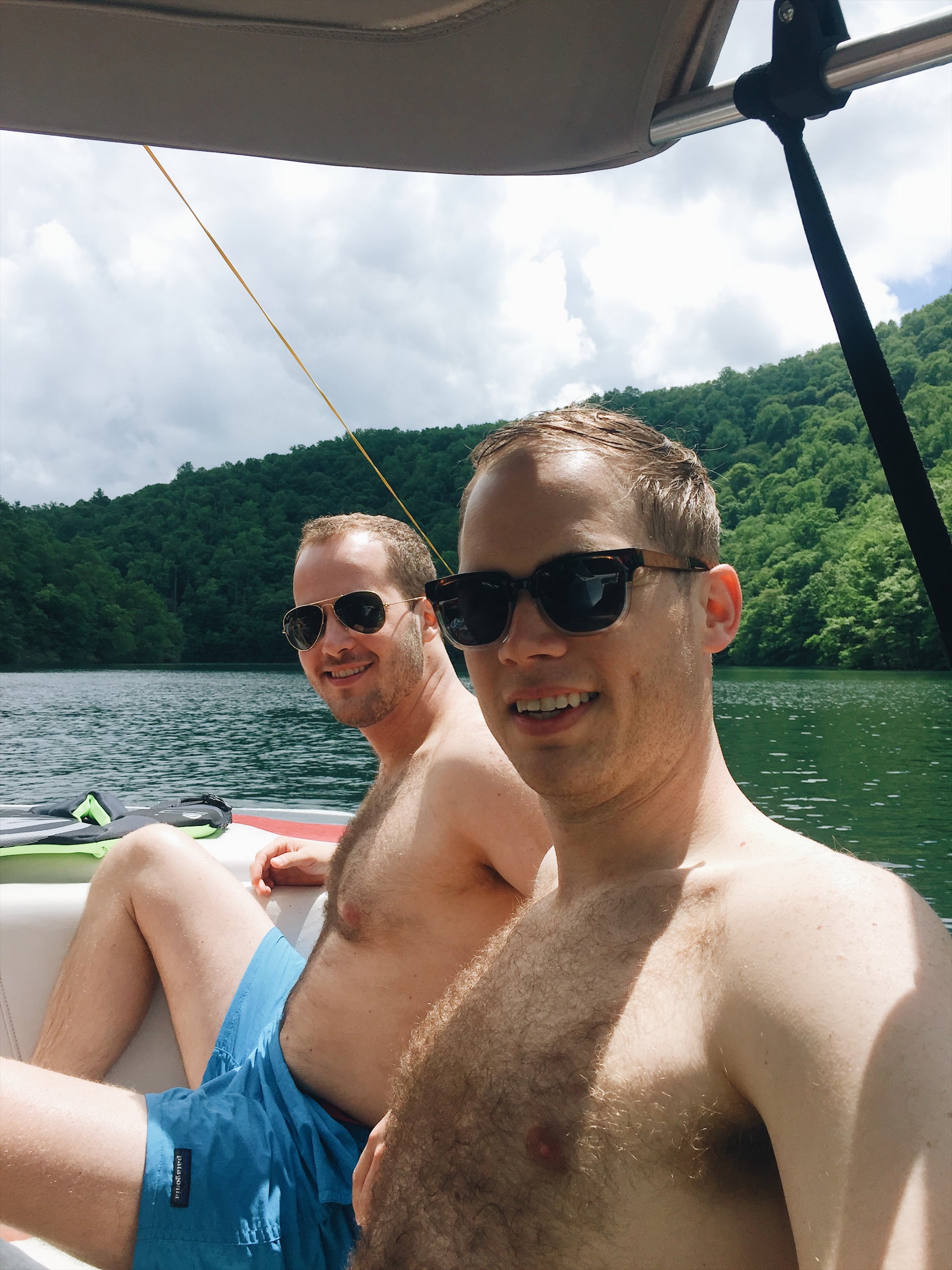 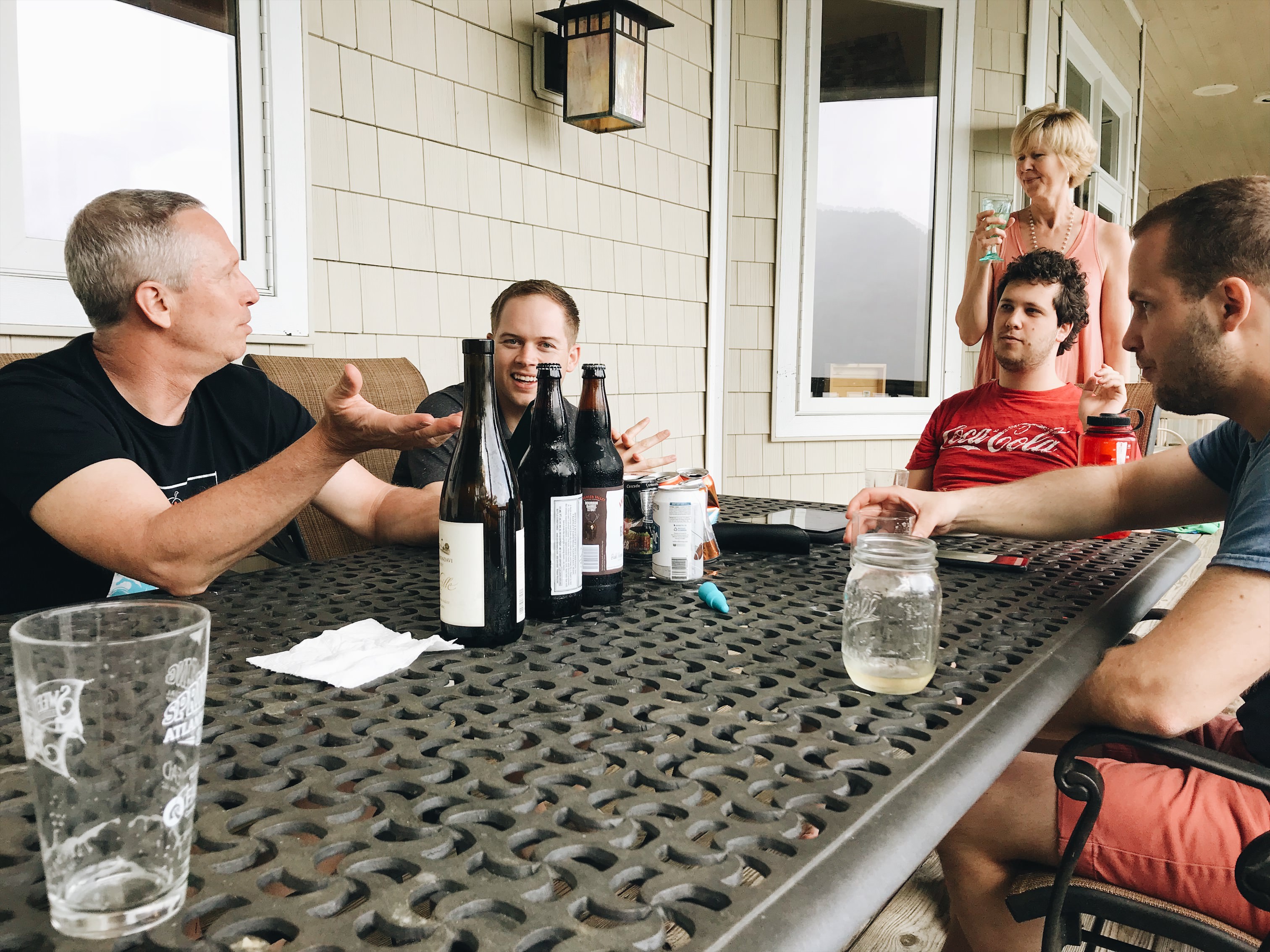 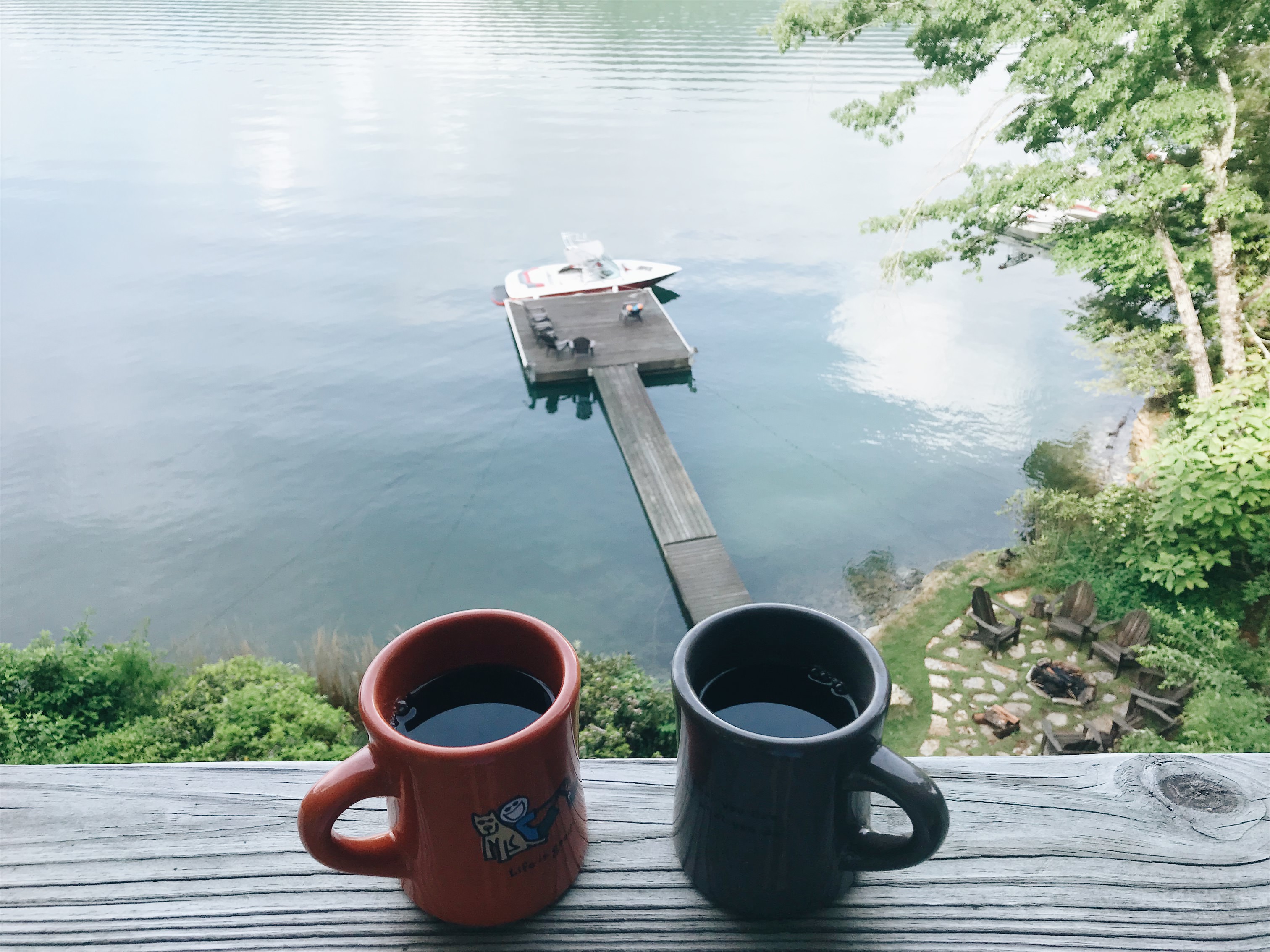 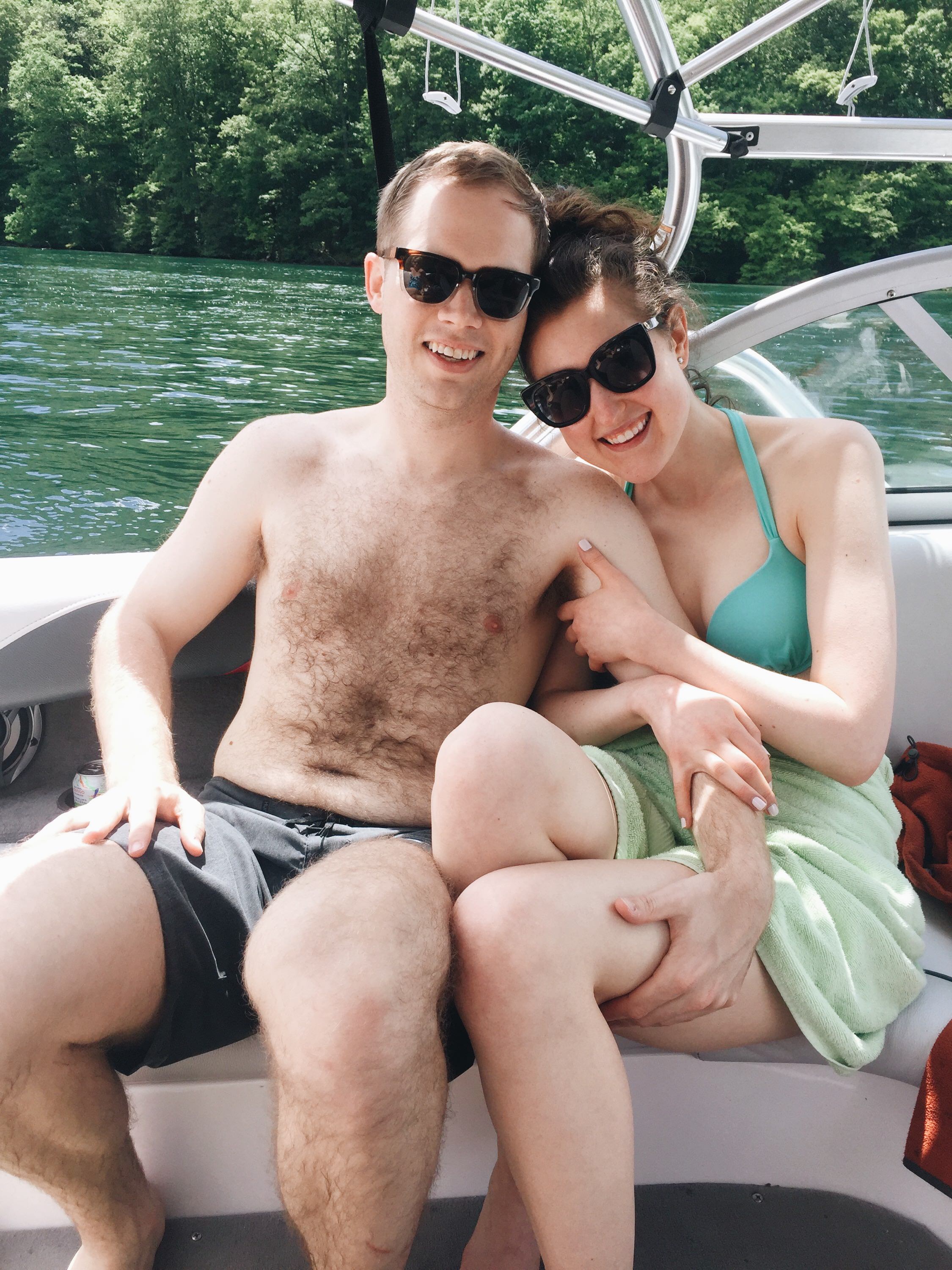 We’ve been back in Chicago for a few days now. I’ve gotten many messages from friends, family and clients, and it has been completely overwhelming to receive such kind, celebratory words. The Instagram likes, Facebook comments, phone calls and texts are wonderful, and I appreciate each one.

But most importantly, I am thankful for Andrew. He has become my best friend, my encourager, my sounding board and my first call. He has seen me through ups and downs, and in everything, he points me back to Jesus. His proposal was more than a ring and a waterfall. It was Andrew asking me to take the next step with him, committing to one another and to God.

After we left Toccoa, Andrew let me read a letter typed up on his phone — words he wanted to tell me when we were standing at the falls. I have thought about these words every day since:

I used to pray at great length for God to reveal his grand plan to me, telling me what to do next. I longed to know His will for me. Where should I live, whom should I date and whom should I eventually marry? Praise God. For when I met you, he politely and slowly revealed how his will was already nested within me. We are already compatible and He is behind every door.

God’s will for both you and I is that we bear much fruit, that we pray without ceasing, and that we always give thanks. God’s will is Jesus FOR us, IN us, and through us. I’m thankful God has given us free will and that in his divine plan he saw to it that we should meet. I want to walk alongside you forever. I want to build each other up, constantly reminding one another of our identity in Christ alone. I want to be partners in sharing this message to our friends, enemies, clients, and colleagues.

I love you, Andrew, and I cannot wait to be your wife. 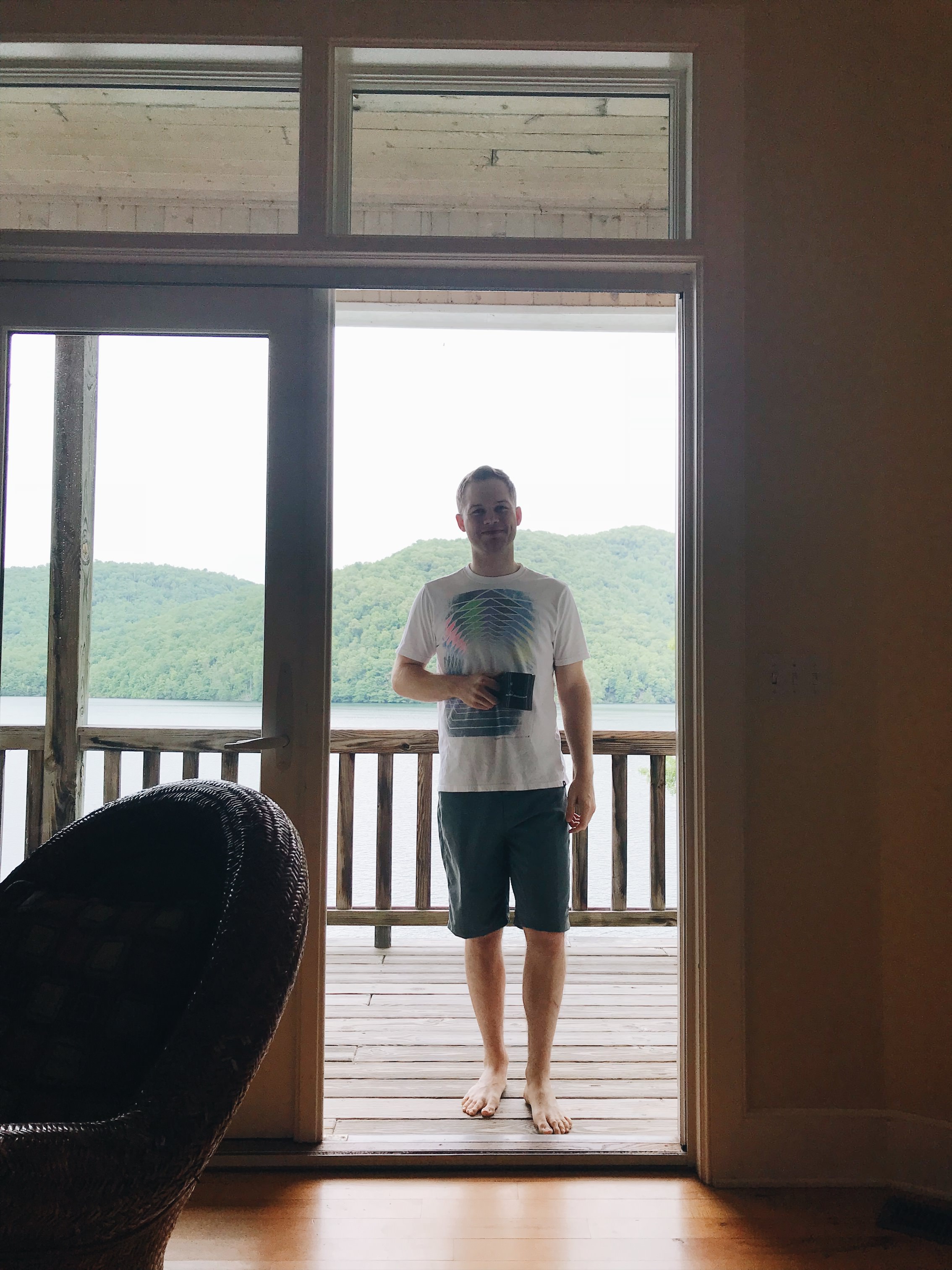